Summer is my least favorite season. However, I do enjoy reading outside, especially at the beach or under a shady tree. If you, and your teens like books set during the summer, here are ten recommendations:

CAMP by L.C. Rosen: “At Camp Outland, a camp for LGBTQIA teens, sixteen-year-old Randall “Del” Kapplehoff’s plan to have Hudson Aaronson-Lim fall in love with him succeeds, but both are hiding their true selves.”

Cool for the Summer by Dahlia Adler: “Larissa Bogdan spent her summer vacation with her mom on the Outer Banks, working on her tan and making new friends like Jasmine Killary. Now back at Stratford High, and has attracted the attention of superstar quarterback Chase Harding, the guy she’s crushed on since middle school. Then Jasmine shows up, a transfer student who entices Stratford’s student body with her glittering beauty and casual-cool style. Jasmine isn’t even acknowledging their friendship– much less the hot summer nights they spent together. It was supposed to be a playful fling, but now that Larissa’s got the guy, why can’t she stop thinking about the girl?”

Juliet Takes a Breath by Gabby Rivera: “Juliet, a self-identified queer, Bronx-born Puerto Rican-American, comes out to her family to disastrous results the night before flying to Portland to intern with her feminist author icon–whom Juliet soon realizes has a problematic definition of feminism that excludes women of color.”

Loveboat Taipei by Abigail Hing Wen: When Ever Wong’s parents sent her away for the summer, she’s expecting Chien Tan: a strict, educational immersion program in Taiwan. Instead, she finds the infamous “Loveboat.” There, Ever is surrounded by prodigies, like Rick Woo, Chinese American wonder boy and longtime bane of her existence; Ever’s roommate, the confident and clever Sophia Ha, as glamorous as she is sharp; and the intimidatingly cool Xavier Yeh, heir to an international tech empire. But her classmates are more interested in the nonstop Taipei nightlife than anything to do with the curriculum. Hookups abound, snake-blood sake flows, and adult supervision is nonexistent. For the first time ever, Ever is discovering what freedom tastes like and it’s exhilarating. But summer will end and Ever will be back to her parents and the future they’ve planned for her. Will she let this glimpse of freedom go – or will Loveboat give her the courage to pursue the future she dreams of, and the Ever Wong she wants to be?

Only Most Devastated by Sophie Gonzales: Will Tavares is the dream summer fling, and Ollie thinks he’s found his happily ever after. Then Will stops texting him back, and a family emergency has Ollie uprooted and enrolled at a new school in North Carolina. Turns out Collinswood High is where Will goes to school– but here he is a class clown, closeted– and a bit of a jerk. When Will starts popping up in every area of hiss life, Ollie would be an idiot to trust him again. Right?

Summer of Salt by Katrina Leno: “No one on the island of By-the-Sea would call the Fernweh women what they are, but if you need the odd bit of help, such as a sleeping aid concocted by moonlight, they are the ones to ask. Georgina Fernweh waits for the tingle of magic in her fingers– magic that has already touched her twin sister, Mary. But with her eighteenth birthday looming at the end of her last summer on the island, Georgina fears her gift will never come. She meets and falls in love with Prue Lowry, a visitor to the island. When a three-hundred-year-old bird, Annabella is found violently murdered, suddenly the island doesn’t seem so magical. Georgina turns to the Ouija board to discover the dark secrets of Annabella’s death.”

The Summer of Everything by Julian Winters: “Adulting is hard. Just ask Wes Hudson. An avid comic book geek, Wes excels at two things: slacking off and pining after his best friend, Nico. Advice from his friends, ‘90s alt-rock songs, and online dating articles aren’t helping much with his secret crush. And his dream job at Once Upon a Page, the local indie bookstore, is threatened when a coffee shop franchise wants to buy the property. To top it off, his family won’t stop pestering him about picking a college major. When all three problems converge, Wes must face the one thing he’s been avoiding-adulthood.”

The Summer of Jordi Perez (And the Best Burger in Los Angeles) by Amy Spalding: “Seventeen, fashion-obsessed, and gay, Abby Ives has always been content playing the sidekick in other people’s lives. While her friends and sister have plunged headfirst into the world of dating and romances, Abby’s been happy to focus on her plus-size style blog and her dreams of taking the fashion industry by storm. When she lands a great internship at her favorite boutique, she’s thrilled to take the first step toward her dream career. Then she falls for her fellow intern, Jordi Perez. Hard. And now she’s competing against the girl she’s kissing to win the coveted paid job at the end of the internship.

The Way You Make Me Feel by Maureen Goo: “Clara Shin lives for pranks and disruption. When she takes one joke too far, her dad sentences her to a summer working on his food truck, the KoBra, alongside her uptight classmate Rose Carver. Not the carefree summer Clara had imagined. But maybe Rose isn’t so bad. Maybe the boy named Hamlet (yes, Hamlet) crushing on her is pretty cute. Maybe Clara actually feels invested in her dad’s business. What if taking this summer seriously means that Clara has to leave her old self behind?”

This One Summer by Mariko & Jillian Tamaki: Rose and her parents have been going to Awago Beach since she was a little girl. It’s her summer getaway, her refuge. Her friend Windy is always there, too, like the little sister she never had, completing her summer family. But this summer is different. Rose’s mom and dad won’t stop fighting, and Rose and Windy have gotten tangled up in a tragedy-in-the-making in the small town of Awago Beach. It’s a summer of secrets and heartache, and it’s a good thing Rose and Windy have each other.

Hooray for Earth Day! Here are five newer non-fiction books for teens interested in learning more about our planet, nature, climate change, and teen activists around the world. 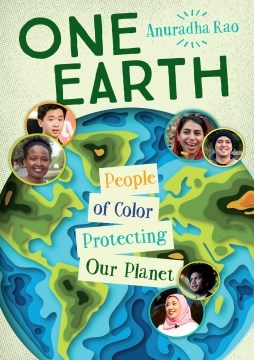 During the summer of 2020, I tried a new virtual program idea (with the help of Pinterest!). Art challenges! I usually had at least 4-5 teens each week, and they had fun. With my summer intern’s help, who was already artistically inclined, we led art challenge programs weekly throughout July and August. However, this is definitely a program librarians or library staff can do solo.

My intern and I started out by coming up with various fun challenges to try. For example:

During each program, we tried at least 4-5 challenges with the option to try more if time permitted. Teens were allowed to draw using pen/pencil and paper, or on their smart devices.

For each art challenge, teens would start out by getting 5 minutes for the first drawing, 4 for the second, 3 for the third, and so on, just to make it a little more challenging and fun. After the time was up, whoever felt comfortable would share and briefly discuss their artwork.

While I am not the most talented artist, I had a lot of fun. As did my intern who loves to draw!

Leading art challenge programs can be done in a multitude of ways and without much of a programming & supplies budget!

Hope this inspires you to try a challenge or two of your own!

If you’re looking for helpful and entertaining book recommendations, look no further than some of my favorite booktubers:

Adri (they/them) is a queer, non-binary, and trans Latinx reader in their early 20’s. Adri reviews books of all genres and for all ages, but definitely has a soft spot for manga and graphic novels. They are especially passionate about queer representation, intersectionality, feminism, and lifting and centering marginalized voices.

Brody is a 23-year-old queer, non-binary and Native booktuber in Florida. Brody reviews books for all ages and is a co-host of the yearly IndigAThon challenge. IndigAThon is held every November to uplift Native stories and experiences.

MoonyReadsByStarlight
Bek (they/them) is a 27-year-old booktuber who loves reading LGBTQIA+ non-fiction, YA fiction, history and memoirs. They post in-depth reviews weekly and are an avid user of their local library.

Bowties & Books
Jesse (they/them) is a Black and Mexican queer and non-binary booktuber in their 20’s and based in Minneapolis. Jesse posts honest and comprehensive book reviews, unboxing and shelf organization videos, and so much more. Jesse also founded the enby book club and created their very own TBR tarot cards set.


Hey y’all! August is Romance Awareness Month! Why not read and recommend some newer swoon-worthy novels and get a little much-needed break from EVERYTHING!?! Enjoy!

Can’t get enough? Try checking out these lists too:

To support, promote, advocate, and build a community space to highlight the importance of Teen Services in minding the gap.